I can spell my name real good.

I've spent the last few weeks in pre-produciton, assembling the show bible. It's strange trying to condense everything I know about the characters and the world into an easily digestible format. And it's even weirder trying to reverse-engineer the way I draw so others can duplicate it. Thank goodness I had the pilot art to start with. Mouthcharts, incidentals, and various poses were all ready for me to use. I just wanted to tweak the main models a bit. After drawing three boards, I gained a better understanding of how to construct them consistently and what their proportions should be.

Here are a couple of sketches of Chowder. These were drawn directly in the computer. I'm still getting used to the Cintiq. The key to making him look right, I learned, was keeping him fat. Lots of cheek and chin around his features. 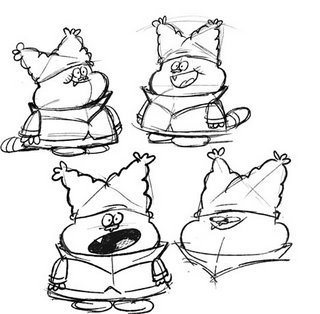