Batman vs the FRONT WINDOW!

Everyday, Batman gazes patiently out the tall window next to the front door. He bides his time, waiting for another dog or a jogger to pass by. Then he unleashes what I can only guess are a stream of expletives in dog language. It's pretty explosive. One time he was jumping so hard at the window, he scraped the area next to his right eye, losing a chunk of skin. I didn't figure out how he done this to himself until I found the patch of skin still stuck to the wall! 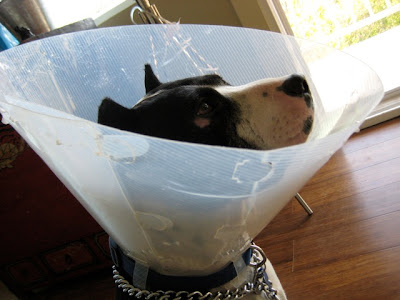 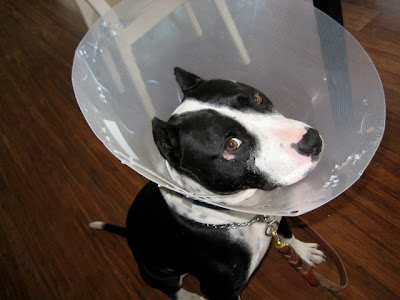 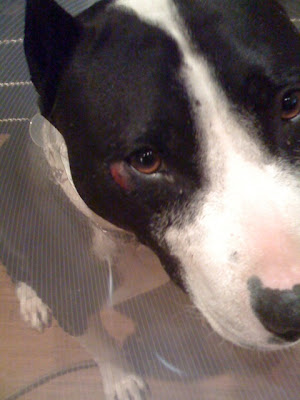 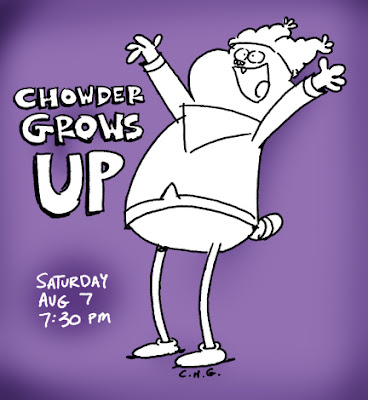 The last new Chowder episode finally airs this Saturday night! There's an all-day marathon leading up to the 7:30 pm premiere (Pacific). Set your DVRs or be old-fashioned and watch as it airs. I had always wanted to jump the series ahead in time at some point (like Dragonball Z) and follow Chowder as the master chef with an apprentice of his own. This would have been the bridge to that adventure. It's a nice way to wrap up a series that meant a lot to me. And I even got to voice grown-up Chowder.

Thanks to the crew for all their great work, to the voice actors for bringing the characters to life, and to the people at the network who championed the show! But most of all, thanks to the fans for watching! This episode is for you!
Posted by C H Greenblatt at 11:11 PM 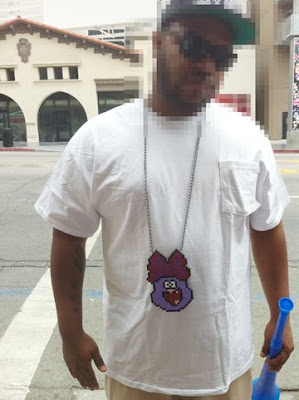 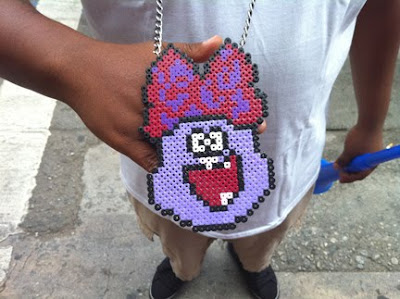 These photos were taken by a friend of mine at a bar during the World Cup final. He spotted this Chowder fan by his awesome necklace. Way to represent! Oh and we got nominated for an Emmy. Congrats to the entire crew for all their incredible work. And congrats to the other nominees - they're all talented, good people and any one of them deserve to win.

Batman vs The Screen Door!

One afternoon I put him out on the balcony while we did some house cleaning. I figured he'd chill out in the sun for a bit... 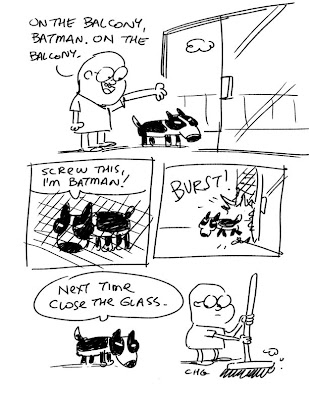 You can see the result... 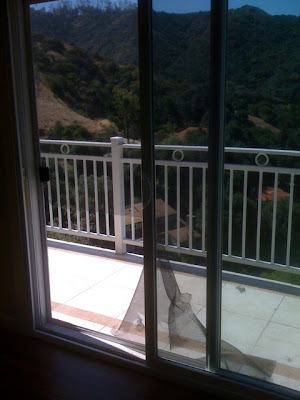 It reminded me of the Kool-Aid man. Here's a clip for those of you too young to remember:

BATMAN VS THE SCREEN DOOR... BATMAN WINS!!
Damn you dog. Damn you. But I did learn how to re-screen a door. It's pretty easy. 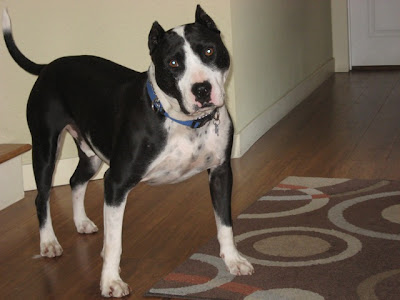 Batman vs The TireBiter!

It was a quick match, lasting barely 30 minutes.

When the dust cleared, only one stood victorious. 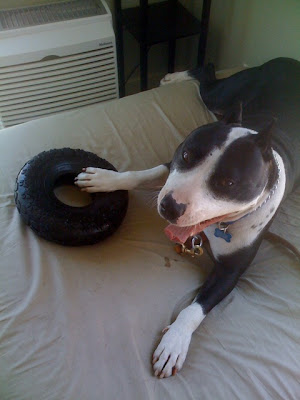 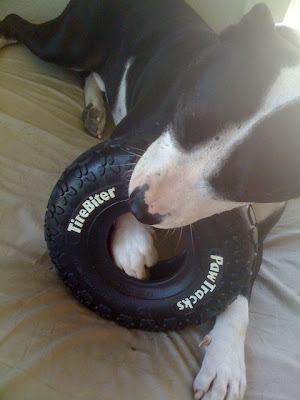 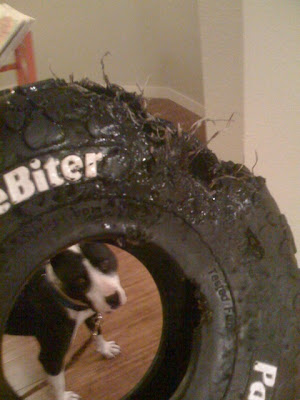 (He was pooping out bits of tire for the next few days.)
Posted by C H Greenblatt at 10:41 AM

Batman vs. The Bed

This is the first in a series of posts based on my dog and what nefarious home goods he's decided to attack. This particular kerfuffle occurred soon after we moved into our house.

I imagine the encounter must have started exactly like this... 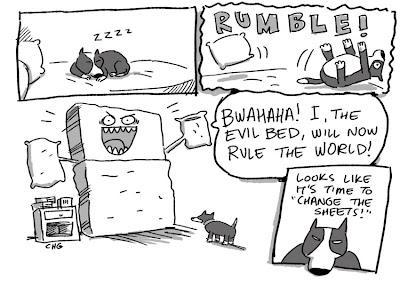 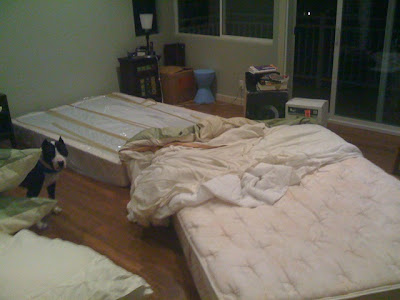 BATMAN VS BED... BATMAN WINS!
(Yes, he dragged the mattress off the box springs and proceeded to shred the sheets and mattress cover. Trust me, that mattress ain't light.) 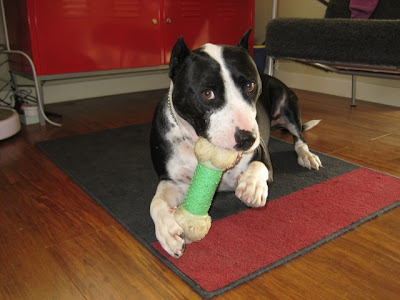 As one thing fades away... 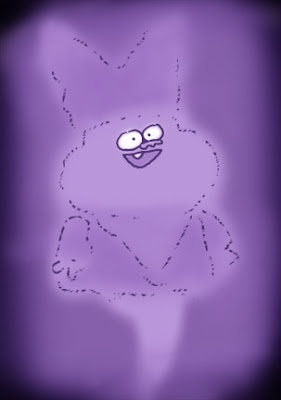 The final regular episode of Chowder premieres this Monday (April 5) at 9 pm Pacific. I don't know if we ever stayed in the same time slot for more than a month during premieres, so it seems fitting to change again right before the last one. It's been a good run of 49 half-hours and I hope people enjoyed it. It's been one of the best experiences I've ever had. Thanks to everyone who watched. Our finale special, Chowder Grows Up, doesn't have an air date yet, but as soon as I find out, I'll post it.

Life at Disney has been fun so far. We're working hard on FishHooks and I'm sure Disney will do everything in their power to make sure kids know about it when it launches.

As for what's next, I've been busy developing something new for Nickelodeon. It's coming along really, really well and I'm very excited. It was kind of daunting at first to start over with a whole new world, but once I left Marzipan City and embraced it, the ideas didn't stop flowing. For now, I'll give this hint: Whether it actually becomes anything or not, it's a whole lot of fun to work on right now.
Posted by C H Greenblatt at 8:26 PM 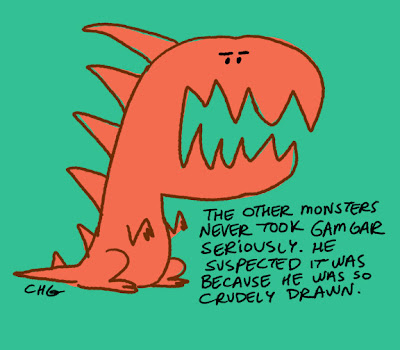 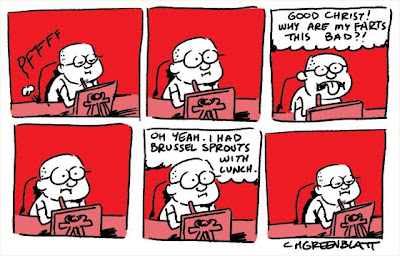 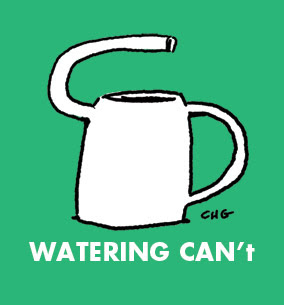