So I guess it's time to join the cool kids over at Tumblr.

I'll start posting all my new stuff there and I promise to put things up more regularly. I've been making an effort to carry my sketchbook around at work and doodle more, so I have lots of good stuff to scan in. Go check it out.

And we recorded the pilot today! It went really well! Next step is animatic and artwork. I've got a busy two months ahead, which is good because I need a distraction to keep me occupied until Skyrim comes out. 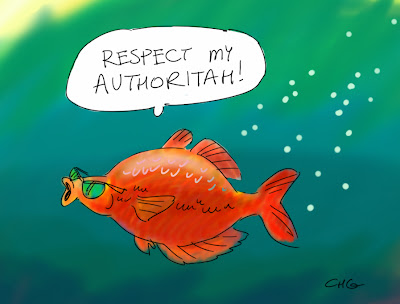 My red rainbow fish Cartman passed away yesterday. He lived a good long life - nearly 10 years, which is apparently double the life expectancy of his breed. I don't get emotionally attached to fish, but looking at the now empty tank fills me with a little loneliness. His fat ass took up a good chunk of space in there. In fact, he had grown too big for the scooper net so I had to put a Ziploc bag over my hand and grab his slippery corpse. It was the first time I had really touched him other than the occasional finger brush when I would clean the tank. He had an unceremonious burial on the hillside. Some raccoon has probably dug him up by now... blech.

When my wife (then girlfriend) first met him, she asked me what his name was. I didn't really get into a habit of naming my fish, but he was a big red asshole who bullied the other fish and ate all their food, so "Cartman" seemed appropriate.

Cartman, I hope you're out there swimming in the great blue beyond.

After a year and a half, Nickelodeon finally gave the go-ahead for my pilot to get animated. Other than a long wait, the process has been really smooth and positive! Having the extra time let me figure out a lot of good stuff about the characters. It's hard to know exactly who they are until you start playing with them. They have a pretty different dynamic than the characters on Chowder.

This is the exciting part of the process. It's all potential. I'm finishing board revisions and casting voices. Next step will be to assemble all the production art, then ship it to the animation studio. By January we should have a fully functioning 11-minute pilot!

Here's a sneak peek at the art. 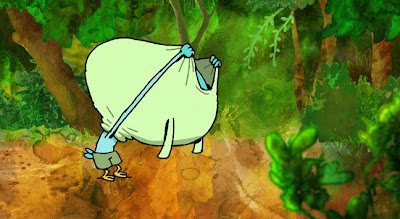