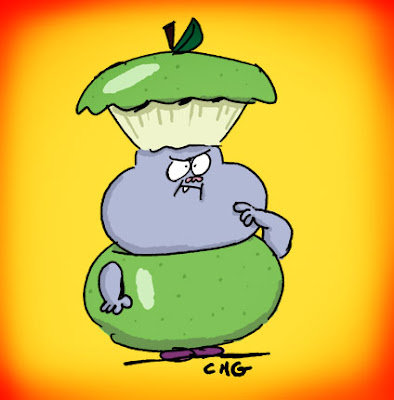 This week's episode was supposed to be promoted as a special, so I figure at least I could get the word out. It's a half-hour story about the catering company putting on a mystery dinner theater show. Waiting for Guffman was a big inspiration. I love that film so much, probably because I had so many crazy theater friends in high school.
This is one of those episodes where nothing actually happens. I always like those kind of stories - the much ado about nothings. They're harder to write but give you more time for little character bits; like Shntizel standing in line at a bank, or the cast from Evil Con Carne stuck in traffic on their way to a heist. I want to give a big thanks to Bill Reiss for making it turn out so well.
And also a very big thanks to the crew of the show. They've been friends of mine since we worked on Billy & Mandy and it's sad to be laying them all off. Each week there's fewer and fewer of us left. It's rare when you get work with people you really like, and I'm grateful for having that for the last seven years at CN. I hope we all get to work together again soon!
Posted by C H Greenblatt at 10:43 PM 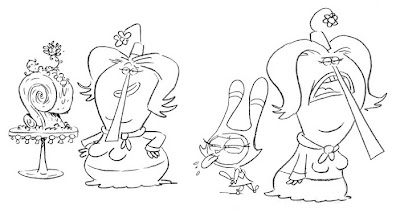 Here's some art from the original Chowder pitch I brought to Cartoon Network. Both characters changed pretty radically once the series began. Endive had a physical change, but Panini had a total rethinking. In fact, she was originally named Borlotti (a type of bean.) The first version of her design had pointy ears, but that didn't fit with the rounded, soft feel of the rest of the characters. She also had an outfit where only her face poked through.
In this stage, she was kind of mean and I thought of her as someone who would take advantage of Chowder to her own ends. She seemed like an Angelica from Rugrats. But then I realized I don't like those kind of characters. She needed to be cuter and sweeter. Once I figured out she'd have a crush on him, everything about her made sense. Not being of the age yet where he's into girls, she would cause Chowder plenty of consternation, but in a more fun way. And the new name seemed to suit her better.
Endive's character stayed pretty much the same, but became more of a triangle shape. The long nose was always there and was supposed to represent the way she would look down her nose at everyone. It was great to see her personality evolve naturally over the course of the series, especially when written by William Reiss. Now it's crazy trying to imagine if the two of them had stayed like this. 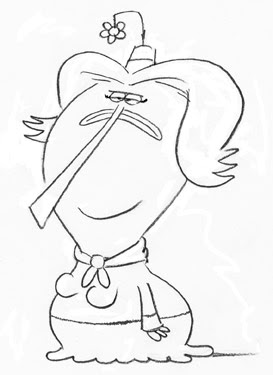 When I came to CN on the Grim Adventures of Billy & Mandy, I was lucky to work on a show with a great crew. But the show also had another great element, Jay Bastian. Jay was our executive in Atlanta, and I don’t think there could have been a bigger supporter of the show. Billy and Mandy had a lot of opposition over the years, and I know that Jay stuck his neck out for it again and again. Upon meeting Jay and the rest of the executives in charge of CN’s original series, I was impressed by how much they genuinely loved animation and the people who made it.

Jay was one of the first people I pitched Chowder to. The first thing he said was, “It looks young.” But the next thing he said was, “It’s you, so I’m sure it’ll be awesome (and wrong).” When the time came for Chowder to begin, I was thrilled to find out that Jay would be the executive in charge of the show. He never gave notes for the sake of giving notes to justify his job. His notes were his gut feelings. He didn’t approach his job as an executive – he approached it as a fan of the series. He always pushed us to do better, letting us figure out our own solutions rather than dictating exactly what he wanted. He respected the artists and that’s rare. His list of credits runs far and wide across the last 11 years of CN.

Anyone who knows Jay knows he has three favorite movies: Star Wars, Jaws, and Indiana Jones. Anytime Jay had a story problem in one of our episodes, he’d invariably compare it to one of those movies for reference. Always. Without fail. So here’s a drawing I made for him, merging two of his great loves. 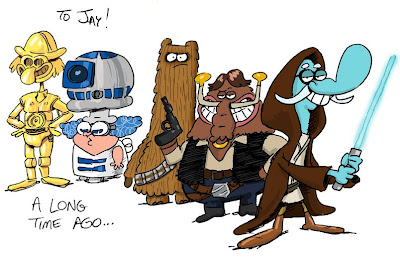 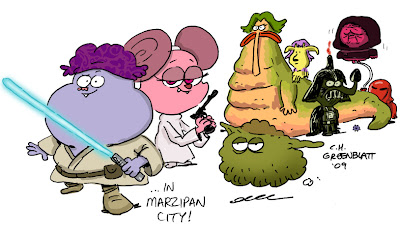 (I probably should've made Truffles into Yoda and Ceviche into R2-D2.)

I’ve been spoiled and it’ll be hard working with anyone else. I hope that Jay and I can work together again sometime soon. And like the Golden Girls said, "Thank you for being a friend."
Posted by C H Greenblatt at 3:32 PM

And if you need more proof that we're not a part of CN's future, take a look at this page. 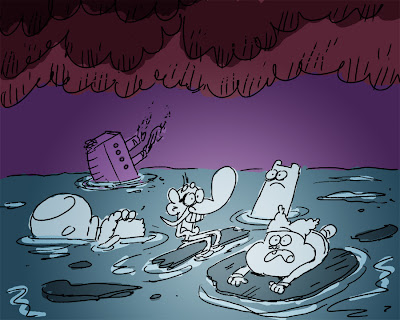 No mention of Chowder or Flapjack in the summer shows. And you can't say it's just new shows they're promoting, because Clone Wars has been on, Flicks has been on, and Total Drama Action is a sequel to an existing show. There's a sea change afoot and we're getting swept under.

But at least we get to premiere all new episodes until the end of the year! And they're really good ones. We hit a great stride second season. So do enjoy!
Posted by C H Greenblatt at 2:01 PM