I really love seeing all the fan art that's out there. We've printed out a bunch and put them up around the office. So I thought I'd post the actual patterns that we use for Chowder's outfit. Feel free to use them to keep making more great art. 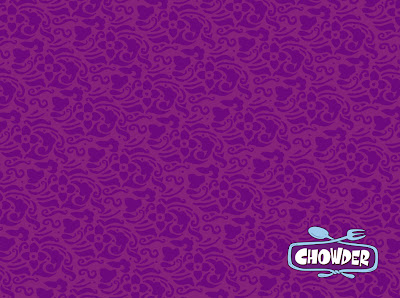 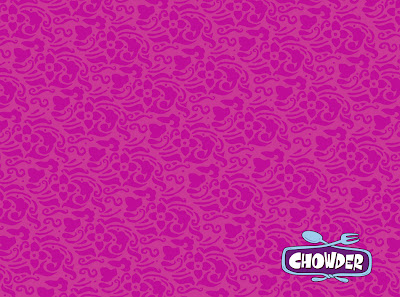 Here's a quick way to apply them with Photoshop:
- select a big chunk of the pattern, then "copy" it
- with the magic wand, select the areas you want to fill in
- paste in the pattern 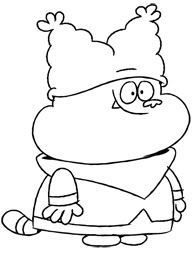 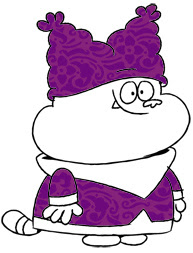 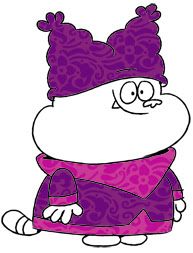 You may have noticed there wasn't a new episode this week even though it had been advertised. I'm sad, too. There may not be any new episodes airing for a little while. I think the network wants to hold them so they can do a longer run of new ones, rather than in short spurts. I can't say much else except to hang on patiently. We've got some really, really good ones coming up.

In the meantime, here's an absolutely incredible Chowder short made by a very talented fan, AnimateEd. Be sure to give him some love. He obviously worked very hard on it.
Posted by C H Greenblatt at 3:10 PM 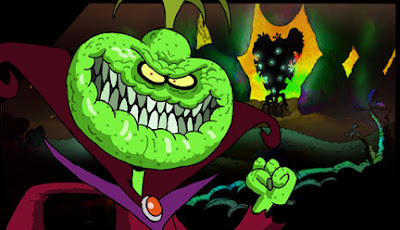 Friday night at 7pm Pacific. Our time slot has officially changed (for some unknown reason, they changed us just 2 months into our run). The first story in this week's show, called The Puckerberry Overlords, was boarded by Billy & Mandy creator Maxwell Atoms! Chowder gets sucked into his own mouth when he eats a super sour fruit and must fight for freedom. It's a bit darker and weirder than the usual stories. I hope you dig it! 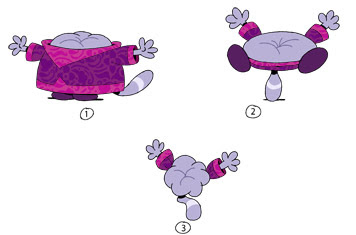 In the second story, The Elemelons, we get some special Truffles time. Truffles' temper gets her locked in a cage with some unruly fruit beasts, and the only way out is to discover her softer side. I see a theme in this week's show - being trapped! This half-hour should be the first of 5 new episodes in a row, taking us to our initial run of 13 half-hours. Season 1 was extended to 20 half-hours, so there'll be plenty more to come. 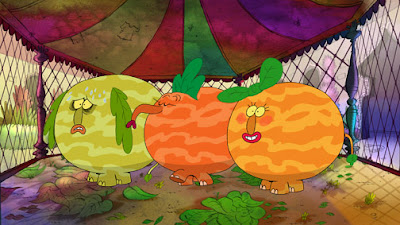 If anyone is planning to go to Wondercon in San Francisco next month, stop by and say hi. I'll be doing a Chowder signing and panel (along with a sneak peek screening) on Saturday the 23rd. I'll post all the details when I get them.
Posted by C H Greenblatt at 12:29 AM

So to ring in the new year, I thought I'd take a few minutes to answer some questions about Shnitzel.

Q: What is he?
A: He's a big, strong rock monster. His job is to help lift and move stuff, along with other grunt work, around the kitchen.

Q: Why a rock monster?
A: Well, here's a little history on him. Shnitzel originally began as a drawing I did in the late 90's as an exercise to see if I could clean up a character in Adobe Illustrator. I was even going to try and animate him in Flash, so I did alternate pieces of him. Back then he was called "Tapiocaca." He was supposed to be sort of like a big rock tiki monster that was always on fire. I even made a cool logo for him. Well I didn't really do anything with him after that, but I still liked the design. So when I was forming the world of Chowder, he seemed like a good fit. I like to think of him as a living menhir from the Asterix comics. 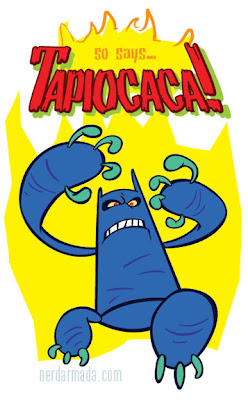 Q: What're all the lines in his pattern supposed to be?
A: The idea is that he's covered with scratches and grooves from all the abuse he's taken over the years. In the pilot (Froggy Apple Crumple Thumpkin) his pattern is swirly. But I felt it looked too much like hair, so I changed the lines to straight criss-crosses.

Here's a very early scribble of Shnitzel from 2000. He was a bit stubbier and didn't have his apron yet. 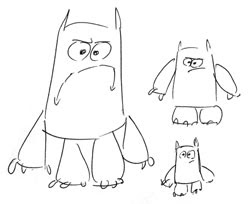 Here's the way to construct him now. 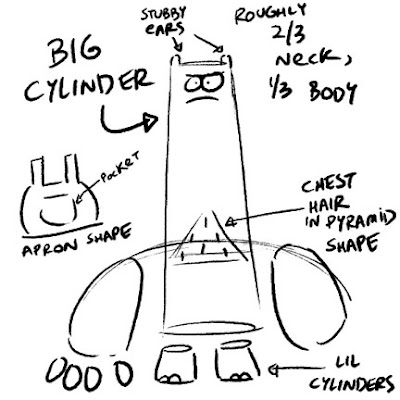 Q: Why does he have ears?
A: To hear things.

Q: Why "Radda radda"?
A: It sounded funny. No real reason. Casting for his part was surreal - Hearing dozens upon dozen of actors saying those words then trying to decide just from some gibberish.

Q: Who does his voice?
A: In the pilot, he was voiced by Kevin Michael Richardson. But Kevin was unavailable when we started the series, so John DiMaggio (Bender on Futurama) jumped in and saved us, doing an amazing job.

Q: Will he ever say anything other than "Radda radda"?
A: I'd rather he didn't. It's like asking if Chewbacca will ever speak English. You can pretty much say he won't, but you don't want to rule out any weird alternate universes or anything.

Q: Is it hard to write a character that speaks in gibberish?
A: The key is context. If other characters repeat back what he said then you'll always know what's going on. Like if he says "Radda radda radda," Mung says "No, we can't chuck him in the furnace!" It gets really hard if he's alone and you have no characters to translate for him.

Q: Is he married?
A: Originally in my head he was. He had a wife that we'd never see, like Norm's Vera on Cheers. But it never came up and didn't really give us anything to add to his character. Plus it's more fun to think of him as the swinging bachelor. So he's definitely single.

Q: Will we ever see his private life?
A: I like his life outside of work to remain a mystery. He's the guy that clocks in, does his job, and goes home. He doesn't share a lot of personal info. Occasionally we'll get glimpses. Like in Gazpacho Stands Up when we saw him doing stand up comedy and he was horrified to be caught by Mung and the rest.

Q: Why does he stay with Mung, Truffles, and Chowder if they make his life hard?
A: They're like his family. Your family can drive you crazy, but they still love you. We're making a special half-hour episode right now that answers that very question. Watch for it in about a year.

So that's it. I'll put up some more history and early doodles on the characters soon. Happy new year!
Posted by C H Greenblatt at 5:01 PM